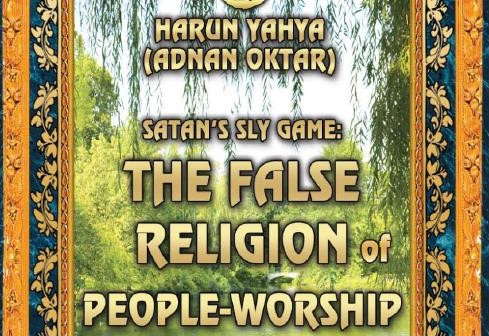 In the Name of Allāh, the Most Beneficent, Most Merciful

Many brothers have asked me about the ’aqeedah [creed] of the Turkish writer and preacher Adnan Oktar and his Manhaj. Due to what has been reported recently about him being sentenced to 1075 years for his crimes including security breaches, immorality, organised crime, drugs etc., the media have disseminated his exposure and referred to him as an “Islamic televangelist” or a “religious preacher” .

It is not my intent here to speak about his deviant personal conduct, his dubious connections, the reasons for his emergence, fame or the financial and media empire which he has, but I rather wish to discuss him in terms of his notoriety among Arab readers. For his books began to be translated into Arabic and published around 25 years ago under the pseudonym “Harun Yahya”. This is not a secret as Adnan Oktar has expressed in many interviews that he selected this name himself, explaining as follows:

Adnan Oktar began his studies in 1979 at the Jameelah Legal College at Mimar Sinan Fine Art University in Istanbul. Here he encountered atheist and Darwinian ideologies widespread among the youth and so he gave importance to debating these ideas and refuting them via affirming Rubūbiyyah and refuting the evolution theory, in close resemblance to the cult of Said Nursī who also based his da’wah on Rubūbiyyah. As for Divinely Legislated sciences – then he did not study at all. He himself admitted this in an interview with al-Jazeerah Channel on 24th October 2007 that he does not know the Arabic language and that he understood Islām by reading books which had been translated into Turkish.

Perhaps the most important contributors to Adnan Oktar’s ideas are the books of Sa’id Nursī (d. 1960 CE) such as Nursi’s Rasā’il un-Nūr [Treatises of Light] which are filled with Rubūbiyyah, repudiating atheists, corrupt beliefs, fabricated ahādeeth and deviated Sūfī ideas. Oktar does not possess any Shari’ or academic ability to equip him to critique and scrutinise any of Nursi’s words which he refers to often in his writings. An example of Oktar’s blind following of Nursi is in his avoidance of getting married, as practiced by Nursī. This is what he claims in any case, Allāh Knows best about the reality of this. In any case, Oktar says about his abandonment of marriage:

When the interviewer asked him: “where did you read this?” Oktar replied:

I do not remember the source of the hadeeth now but you can possibly find it within the books of Sa’id Nursī in his collection entitled Rasā’il un-Nūr which you can find online.[3]

The many works of “Harun Yahya” have been distributed all over the world and translated into numerous languages with elaborate and colourful printing, all of which puts further doubt on this man and the agencies which stand behind him and support him with money and propaganda. In his interview with al-Jazeerah on 24th October 2007 he admitted that he himself does not write these books, he said:

Let me speak about how I write these books. I have a large team around me most of whom know foreign languages to a good level and research all information available in the world whether from books or from the internet. They present this to me in the form of reports and information and then I make comments on this information and select appropriate pictures. I then prepare the book covers and send them to the editor and then the works are published as books. For example, the book The Atlas of Creation, the people think that it was completed from beginning to end but this was not the case. 95% of the book are citations and quotations, as for the comments then this amounts to just 3%, so the rest of the entire book is from quotations.

This is also clear  in terms of the contents of these books as they contain many correct intents related to: īmān in Allāh, sincerity to Allāh, worshipping Allāh, obeying Allāh’s commands, Istiqāmah on Allāh’s deen, seeking Allāh’s Pleasure, actions for success and salvation in the Hereafter – yet it is well-known that Oktar himself is the furthest from these tremendous intents which are oft-repeated in these books! He is far from them in terms of his personal conduct, relationships and environment, and his history is replete with immoral behaviour and crimes for which he has been tried in court.

The worst of what is found in these books by “Harun Yahya” is that which promotes beliefs which oppose the religion of Islām such as the belief of Wahdat ul-Wujūd [‘the unity of existence’] of the Sūfīs but in modern language. He states, frankly: “nothing exists except Allāh” and that anything other than the Creator is merely “imagination and delusions”, as found in his book Fahm Sarī’ li’l-Īmān [A Quick Glimpse at Faith] and in other books:

30. How is it that Allāh encompasses everything and he is closer to us than our jugular vein?

Matter is composed only of sensations. And the only real, absolute being is Allah. This means that only Allah exists; all things except Him are shadow beings. Allah is surely “everywhere” and encompasses all.[4] Everything that exists is an image projected to us by Allah. Since material beings are each a perception, they cannot see Allah; but Allah Sees the matter that He created in all its forms. That is, we cannot grasp Allah’s being with our eyes,[5] but Allah has thoroughly encompassed us from the inside, from the outside, in looks and in thoughts. We cannot utter any word unless it is with His Knowledge, nor can we even take a breath.

…when a human being thinks that his body is made up only of “matter”, he cannot comprehend this important fact…however, when he understands that there is nothing such as matter, and that everything is imagination, notions such as outside, inside, far or near lose their meaning. Allāh has encompassed him and He is “infinitely close” to him.[6]

This is clear kufr which rejects the material existence of the creation due to his extremism in refuting Darwinian evolution theory. When he saw that this principle of this void theory was materialism, he wanted to destroy it by rejecting the reality of ‘the material’ and ‘material existence’ via referral to the Sūfī belief of Wahdat ul-Wujūd which affirms that only Allāh exists. Needless to say, this belief opposes what is affirmed in the deen, intellect, senses and natural disposition by necessity. It is clear rejection of the Qur’ān and such a belief is of the gravest nullifications of Islām, there is no excuse of ignorance or interpretation for the one who utters it. The result of this belief which is found in the books of “Harun Yahya” is that it negates belief in Allāh’s ’Uluww over His creation. “Harun Yahya” says in his book The Struggle of Religion Against Irreligion:

In our day the majority of people who claim to have faith actually live by the false religion which is alleged by the materialists to be “true religion”. In the following section some of the attributes of false religion will be outlined. It will be shown to be inclusive of distorted beliefs held extensively under the name of religion. Unaccustomed to thinking deeply, however, people often fail to notice the faults inherent in those beliefs. It is an important responsibility for sincere believes in Islam to warn people against humanly devised false religions and convey to them the message of the Qur’an, which is the unique source of wisdom that Allah sent down to guide His servants.

Despite having faith in the existence of Allah, many people hold extremely erroneous convictions about where He is. The materialist outlook on life accounts mainly for these convictions.[7]

Here Adnan Oktar claims that the belief that Allāh is in the sky (i.e. transcendent above the heavens) is a “false religion” which must be warned against. Affirmation of Allāh’s ’Uluww [transcendence] over His creation is of the necessities which distinguishes the Creator from the creation. Allāh exists in reality, and the creation exists in reality, and this basic creed is affirmed by the Muslim everyday time after time when he recites in his prayer,

“All praise is due to Allāh the Lord of the Worlds…”

Acknowledging the creation and that it is exists in reality,

However, Adnan Oktar rejects the material existence of “the worlds” and rejects its existence in reality. For this reason, he rejects Allāh’s ’Uluww above His creation and believes in Wahdat ul-Wujūd.

From the clear contradictions of Adnan Oktar is that he holds the necessity of cooperation between the followers of divinely revealed messages, Muslims, Jews and Christians in opposing atheism and Darwinian evolution theory. At the same time he is ignorant of the fact that a core belief of the followers of these three traditions is affirming the material nature of the created world and the belief that Allāh is above the heavens, Allāh’s absolute ’Uluww. To the extent that the Christians, despite their claim that Allāh has a son and the belief in the trinity, differentiate between ‘the divine’ and ‘humanity’ and believe that the Lord is above the heavens.

As for the Islamic creed, affirming Allāh’s ’Uluww is clear in the Qur’ān and Sunnah and is a principle of creed which was agreed upon by the Sahābah, Tābi’een and the Imāms of the Muslims. Most of the common Muslims in all times and places held this and no one opposed them except the philosophers and most of the Mutakallimeen [speculative theologians] who are outside of the Sunnah wa’l-Jama’ah. Whoever wishes to know the Ijma’ of the Imāms of the Muslims on this great principle should refer to the book al-’Uluww li’Aliyy al-’Adheem by al-’Allāmah Muhammad bin Ahmad bin ’Uthmān bin Qāymāz adh-Dhahabī at-Turkumānī ash-Shāfi’ī (d. 748 AH/1348 CE), rahimahullāh.

Maybe with this glimpse at this misguided miscreant (“Harun Yahya”) is a lesson, example and certification for every da’ee [preacher] who does not base their da’wah on the Manhaj of the Qur’ān, Sunnah and creed of the Salaf us-Sālih, i.e. Ahl us-Sunnah wa’l-Jama’ah. He himself needs da’wah and Ishāh [rectification] and he has been a source of evil, corruption and deviation on account of his distance from the Right Path. However, what has been unfortunate is that most Muslims glorify moral deviations and speak much of them, yet they are blind, deaf and foolish in regards to Usūl ul-I’tiqād [creedal principles] and decisive matters of the deen.

And Allāh is the One Whom we ask for help

“The Most Merciful [who is] above the Throne established.”

“For them who have done good is the best [reward] –and extra.”

“Some faces on that day will be radiant...Looking at their Lord.”

The Prophet (sallAllāhu ’alayhi wassallam) stated, in a hadeeth narrated by Suhayb ar-Rūmī (radi Allāhu ’anhu) in Saheeh Muslim: “When the people of Paradise enter Paradise, Allāh will ask “Do you want more?” They will say: ‘have you not made our faces bright? Have you not admitted us into Paradise and saved us from Hell?’ Then the veil will be removed and they will not be given anything more beloved to them than looking at their Lord, Mighty and Majestic.”

At-Tabarānī reported on the authority of Anas bin Mālik (radi Allāhu ’anhu) that the believers will look at the Countenance of Allāh every Friday.